Blood is a minor character in Fallout: Equestria.

Blood is an earth pony mare living as a slave in Fillydelphia. Along with her partner Daff, Blood acts as the oppressive leader of the slaves, taking their food and breaking them to her will. After giving Littlepip a particularly abusive greeting, she volunteers to fight in the Pit.

The night before her fight in the Pit, Blood is taken by slavers into a house of mirrors to be raped. Littlepip witnesses this and decides to rescue her abuser by killing the slavers in a whirlwind of broken glass. The next day, Blood is killed in the first round of Pit fighting by Cinderblock.

Due to her bizarre cutie mark and sadistic tendencies, it is quite possible that Blood was once a raider. 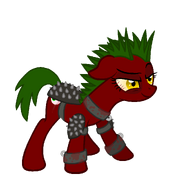