This article is a stub. You can help Fallout: Equestria Wiki by expanding it.

Star Paladin Crossroads, first mentioned in Chapter 28 and introduced in Chapter 33 is an earth pony mare and member of the Steel Rangers.

After the death of Steelhooves, she stepped up to fill the position as the new Elder of Applejack's Rangers. 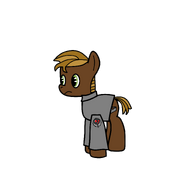 Crossroads as an Elder, made for The Storyteller – A Fallout: Equestria Lore Series by Chokfi.
Community content is available under CC-BY-SA unless otherwise noted.
Advertisement