Daffodil, or Daff for short, is a minor character in Fallout: Equestria.

Daff is a rather large earth pony stallion living as a slave in Fillydelphia. Daff and his partner, Blood, act as the oppressive leaders of the slaves in the bumper car pit to which LittlePip was assigned, taking advantage of them to make things better for themselves. He attempted to rape Littlepip but was deterred by her telekinesis, instead choosing to brutally beat her up. Afterwards, Daff and Blood volunteer to fight in the Pit.

After witnessing Blood's death, he fights and savagely murders her killer, Cinderblock. After surviving his first round, Daff is forced to fight Xenith. He puts up a tough fight initially, relying on his brute strength and dirty fighting tactics, but was unable to overcome Xenith's mastery of the Fallen Caesar Style and was killed.

Daff and his partner may have been Raiders at one point, which would explain their sadistic behavior and rather unusual cutie marks. 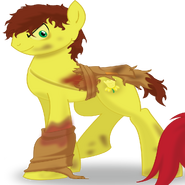 Daff fighting (and losing) to Xenith
~ 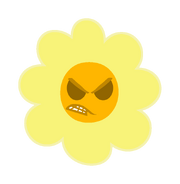