Dawn is a female pegasus born in Hoofington who was part of a group of six friends/companions who set out years before the events of the story to clean up the Hoof.

Dawn was born in the wasteland where she grew up around Hoofington. Dawn became determined to change the wasteland and bring about a new and better era, this revelation led to her discovering her cutie mark, the sun rising at dawn. She travelled with Big Daddy Reaper, Crunchy Carrots, King Awesome, Dr. Zodiac and Keeper all across Hoofington, trying to make some kind of difference and improve the Wasteland. The group eventually split up, Dawn meeting the Enclave pegasus, Sky Striker after he defeated and wounded a black dragon. Dawn nursed him back to health, eventually falling in love with him.

Sky Striker brought her back to Thunderhead and cleared her to stay there getting married in the process. Dawn had five daughters: Dusk, Moon Shadow, Morning Glory and the twins Lambent and Lucent. As a surface pony she didn't quite meet Thunderhead's standards of an ideal citizen and her attempts to get the Enclave to assist the surface made her a target for several assassination attempts. Eventually she decided to leave Thunderhead and become a Dashite, traveling the wasteland and helping ponies as was her true calling.

Dawn arrives in Chapel looking for her daughter after supposedly hearing Blackjack's radio transmission and presumably not recognizing Glory due to her Rainbow Dash appearance. She spends the night though later reveals to Blackjack that she does indeed recognize Glory due to her habits. Blackjack encouraged her to speak with her daughter as it would be good for both of them. Dawn speaks with Glory at Scotch Tape's cute-ceañera party and later meets Blackjack at Chapel's old church, after she views a memory orb that P-21 gave her.

Blackjack and Dawn talk for awhile, walking whilst they converse. Dawn reveals that she is the prophet of the Harbingers and reveals how she met Big Daddy Reaper and the rest of her group. Dawn also explains how she became the Harbinger's prophet, meeting their leader Cognitum. Dawn further explains when pressured that she ordered Sanguine to acquire EC-1101 from Stable 99. She asks Blackjack for the PipBuck, and tries to convince her to give it to her willingly.

Dawn and Blackjack converse outside the old Blueblood Manor where Dawn has Steel Rain and several Harbingers in waiting. Dawn offers to let Blackjack kill Steel Rain and offers her his place in the Harbingers but she refuses much to Dawn's confusion. Blackjack repeatedly refuses to join or help the Harbingers, until Dawn in frustration, orders the tank Blackjack has encountered numerous times to prepare to fire on Chapel. Blackjack in disgust allows her PipBuck to be taken, whilst she berates the Harbingers, especially Dawn, for planning to wipe out a town of foals.

Dawn and the Harbingers try to kill Blackjack, but are stopped by Lacunae's shields. Dawn fights Glory, who is infuriated with her mother. Sky Striker arrives and tries to convince Dawn to come back to Thunderhead with him. She ends up injuring Sky Striker, her skin flaking off and revealing she is in fact a cyberpony. She flies off when the majority of the Harbingers have been killed or fled. During the exchange she reveals that she is a servant of the Goddess Cognitum.

Dawn is a pegasus mare with a light, dove grey coat with a mane consisting of various shades of purples and pinks. Her cutie mark is covered by a Dashite brand, though was formally a rising sun at dawn. She has numerous old scars on her hide and seems to constantly squint to the point it is difficult to see her eyes.

Dawn is an experienced combatant and is extremely quick when flying. She is revealed to be a cyberpony and is capable of taking a lot of damage and incredibly quick flight. Her wings are augmented with knife-like feathers and she has metal griffin claws on her forehooves. 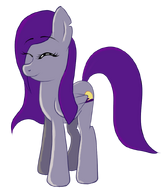 Dawn by InfernalDalek
Community content is available under CC-BY-SA unless otherwise noted.
Advertisement