Dead-Shot is the protagonist of Fallout: Equestria - New Pegas.

Dead-Shot grew up being bitter towards other Ponies and people in general as he was a target for bullies due to his dimunitive stature when he was young. Dead-Shot grew up to be tough, fighting bullies at each town his father's caravan took him and learned to use guns at an early age. His father revealed he had adopted him from a group of junkies who tried to sell him as meat.

After having an argument with his adoptive father, Dead-Shot stormed off only to return three hours later and find his father murdered by Raiders. Dead-Shot was overcome with rage and tracked the Raiders to their camp where he promptly killed each one with a shot to the head, he discovered later that this had earned him his Cutie mark, a pony skull with a bullet going through. He got his first job as a security guard, where he got the chance to kill ponies who deserved it.

Dead-Shot takes a job in Slimm to find Mr.Horse's courier. He makes his way to Goodsprings, following the trail of The Courier only to discover he has been shot and killed by a New Pegas high-roller named Benny. While investigating the murder, Dead-shot is given a PipBuck by Doc Hitchup, who hopes it will help him. Dead-Shot begins a pursuit of Benny following his trail, which leads him back to Slimm, where he acquires his constant companion Pink-E.

The journey continues with Dead-Shot following Benny all the way to New Pegas where he is eventually hired by Mr. Horse as himself to act as his agent.

Father - Dead-Shot though having disagreements with his adoptive father, still cared for him and gained a permanent hatred for Raiders when his father's caravan was destroyed and his dad, murdered by them. His father was well travelled and Dead-Shot's 'Uncle' likely his father's brother or an old acquantance, greeted him Dead-Shot on his return to Slimm.

Pink-E - Dead-shot often finds Pink-E's cheery and optimistic attitude very grating and nearly unbearable, especially since she/it insists on calling him by his birth name Cherry. He initially let the robot follow him out of curiousity but has grown close enough to the robot that he trusts it with watching over Tag-End. He occasionally asks Pink-E to put on suitable music and has to stop her when she rambles.

Tag-End - Dead-shot is taking the buck on as an apprentice, teaching him until he pays back the debt he owes Dead-shot for stealing from him. He is very self-assured of himself but learned some humility when made Dead-shot's slave. He eagerly followed Dead-shot's command to kill Jerky, seemingly to redeem himself and refused The King's offer to try and set him free.

God - Dead-shot see's the massive alicorn stallion as a useful yet dangerous and unstable ally. God is willing to obey Dead-shot to a certain extent and will do his best to protect him from coming to harm or untimely death.

Dead-Shot has a cherry-pink coat and a brown mane, which his father described as being similar to pie crust. His blue eyes, identical to Pinkie Pie's, seem to be a family trait passed down to him.

Dead-Shot is a very down to earth pony. His outlook on ponykind and people in general is grim, given his life as a caravaneer and bounty hunter in the New Coltifornia and New Pegas regions. He would often be bullied when the caravan stopped to trade by other colts but he learned to fight back, the start of his anti-social personality. His father's death has given him a permanent hatred of Raiders and bandits, which bounty hunting allows him to kill frequently.

Dead-Shot will often take advantage of a situation when he can, such as trying to steal a pony's fortune and possessions when given his room keys. He will also perform tedious tasks if it will help him, like when he acted as a messenger for Lieutenant Hays instead of just sneaking into Slimm to begin with. Dead-Shot has no aversion to killing and can do so without hesitation.

Dead-Shot was taken aback when looking at himself in a mirror, barely recognizing himself and wondering when he had last smiled. This eventually leads him to slowly change over time, becoming more sensitive to the needs of other ponies.

Dead-Shot is a skilled markspony, capable of performing headshots outside of S.A.T.S with relative ease. He is also an accomplished scavenger and hunter, displaying both skills on occasion. He isn't very skilled in melee as shown when he tried to ambush and kill Gallant Riposte, losing an eye temporarily.

Dead-Shot wears reinforced-leather barding with a collared undershirt and a worn stormchaser hat (which at some point he trades in for a Shady Hat), his preferred weapon being a Varmint Rifle due to the cheapness and relative ease of repairing it. He later added mods to the weapon to make it more useful in stealthy situations.

He also carries the Courier's Hard-Weathered 10mm Pistol, with which he killed the Cossacks in Big Rock City. In addition, Dead-Shot wears a PipBuck given to him in Goodsprings by Doc Hitchup, though since he wasn't raised to use one he often forgets or is ignorant about its various capabilities. He picked up a steam powered rifle at the Slimm Pass, which he discovered was named Thunder-Child when he decided to use it.

He acquired a key from the ashes of the Diamond Dog, Dog, which gives him the status of God's redeemer, effectively given him control of the massive alicorn. Dead-Shot also retrieved a powerful pistol from the ashes of Dog that was labelled as Mouthkicker by his PipBuck. When escaping the Casino Royale, Dead-Shot took the few remaining possessions of Domino Mask, including his unique 5.56 calibre pistol, That Gun 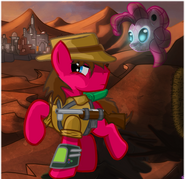 Dead Shot from the cover art. 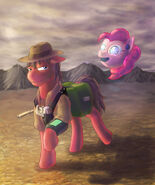 MisterMech
Add a photo to this gallery
Retrieved from "https://falloutequestria.fandom.com/wiki/Dead-Shot_(New_Pegas)?oldid=37930"
Community content is available under CC-BY-SA unless otherwise noted.