Start a Wiki
This story is still in need of a name. It is being written by Amethyst-Dawn.

It follows the adventures of Midnight Star, as she is forced to leave her home in Stable 35 and ends up joining up with two ponies she just met, Harmony, who came from Stable 41, and Val, the bounty hunter of sorts from Vanhoover.

This is set roughly 3 weeks after Fallout: Equestria.

The story can be read here:

The inhabitants of Stable 35 live out prosperous and happy lives, yet they are resigned to the fact that each and every one of them will die at midnight on their 35th birthday because of a terrible, uncureable disease the zebras created.

Midnight Star is one of the ponies living in 35. She is one of only 3 ponies with wings in the Stable and the great something grandaughter of Overmare Cadance, but that isn't what alienates her from her peers, what does is the fact that she is the oldest blankflank in know history. She recently lost her father, and is constantly bullied by the two most popular mares her age, and faced with her mums 35th birthday, which is her on the same day as her own 17th birthday, Midnight feels her life can't get any worse. Oh how wrong she is.

Midnight and her mum have a joint birthday party, and Midnight tries to make it good, her last night with her mum, but as midnight approaches, Midnight discovers Overmare Cadance's horrifying secret, and is forced to leave the Stable under the threat of her sister Misty Veil's untimely and painful demise.

Forced out of the only home she's ever known, Midnight must struggle to survive in the Equestrian Wastelands, or die trying, and who knows? Maybe she will discover her special talent along the way.

Midnight Star: A young pegasus mare from Stable 35 and the great-somthing grandaughter of Princess Cadance and Shining Armour, she is the protagonist of the story.

Twitch: A snow rabbit with faintly glowing blue eyes who starts following Midnight around for no apparent reason. Snow Rabbits live in and around the Crystal Empire. They have evolved to be 3 times the size of ordinary rabbits and have little horns and big sharp fangs.Usually they have red eyes, and are dangerous to ponies, but Twitch is different.

Harmony: An earth filly, Harmony lived a fairly happy, though boring life in Stable 41 with her parents, Grass Seed and Poppy. Once she got her cutie mark, she was kicked out of her Stable because she was considered a Frivolous Pony, a pony with no use or value. She thought her life was over, until Val found her and convinced her to join him.  An apprentice Bounty Hunter, she’s spent the last 3 months since leaving Stable 41 with Val, who has taught her everything he knows about surviving in the Wastelands.

Val (Valiant): A unicorn stallion. A bounty hunter of sorts, he gets hired to rescue/find ponies that have been taken by slavers or have gone missing. As a colt, he lived in the outskirts of Vanhoover in a little settlement called Lake View, which sat on the edge of a large lake. His father, Silver Dollar, was a well-known bounty hunter, and was often away on business. He was away when Val got his cutie mark protecting his mum, Willow Wish, little brother, Gun Shot, and baby sister, Violet, from two slavers, and he killed one. The second slaver then returned the next day with reinforcements and killed Willow, but he managed to escape with Gun Shot and Violet, who now live in the town of Tall Tale with Silver Dollar, who retired from the bounty hunting business after he lost a leg whilst going after the slavers who killed his wife. Val’s failure to save his mum haunts Val to this day, and he has vowed to protect those who are defenceless.

More to be added as the story progresses 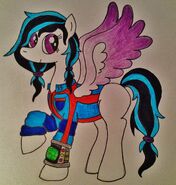 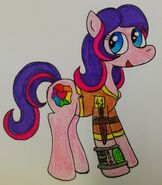 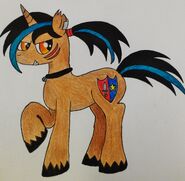 Val (Valiant)
Add a photo to this gallery
Retrieved from "https://falloutequestria.fandom.com/wiki/FO:E_-_Talent_Pending?oldid=45210"
Community content is available under CC-BY-SA unless otherwise noted.