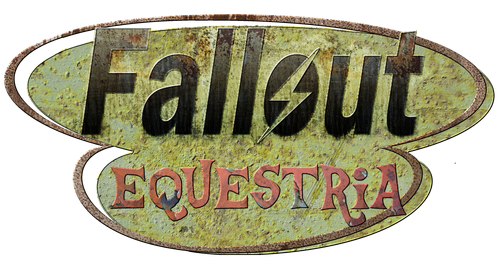 Fallout: Equestria is a crossover fan-fiction between the My Little Pony: Friendship is Magic television series and the Fallout video game series, and was written by Kkat. First published in April 2011 and completed on Christmas of that year, Fallout: Equestria spans 45 chapters (as well as a prologue, introduction, epilogue, and afterword), and contains over 620,000 words, making Fallout: Equestria one of the longest self-published works of derivative fiction in existence.

It has become one of the most critically well-received derivative works in the My Little Pony: Friendship is Magic community, and has a substantial cult following that has produced thousands of new works of art, literature, and music dedicated to the fan series.

Below is an index of links to the various ways you can experience the story of Fallout: Equestria.

Fallout: Equestria is set entirely within the universe of My Little Pony: Friendship is Magic, with only superficial ties to the Fallout universe via borrowed concepts and inspired-by technology. The story occurs two centuries after a war between the pony nation of Equestria and a zebra empire which ends in a megaspell holocaust that decimates much of Equestria and the known world. It takes place in a region known as the Equestrian Wasteland, which includes several locations featured in Friendship is Magic, including the ruins of Ponyville, Canterlot, Manehattan, Fillydelphia, and the surrounding countryside.

The Wasteland is home to various environments ranging from barren wasteland to the decimated ruins of pre-war cities, and there are numerous environmental hazards that plague the countryside. The region is perpetually covered by a layer of near-impenetrable clouds which prevents direct sunlight from reaching the ground, restricting the growth of healthy plant and animal wildlife, which is mostly mutated and irradiated.

Cultural, social, and technological advancements have stagnated since the end of the Great War. Numerous small settlements dot the region, home to descendants of survivors from the war, though population remains low due to the perpetual state of lawless anarchy. The lack of any large-scale civilization in the Wasteland has allowed the propagation of numerous violent bands of raiders and slavers, who terrorize and harass the last bastions of civilization. Various Stables, underground installations constructed by Stable-Tec in order to house and protect the citizens of Equestria in the event of a megaspell attack, also populate the Wasteland; some in states of decay, and some still well-preserved and even functioning after centuries of operation.

The story follows the adventures of a clever young unicorn mare named Littlepip who departs her underground Stable and treks across a toxic, ravaged Equestria that was devastated by a war two centuries past, initially in search of her fellow Stable dweller, Velvet Remedy. Throughout her travels in the Equestrian Wasteland, she struggles to cope with the realities of post-apocalypse life whilst doing what she can to restore hope and light to a land plagued with suffering and darkness. Along the way, she combs the ruins of the world that came before, piecing the together the mysterious events surrounding the long-deceased wielders of the Elements of Harmony and learning of the heated political atmosphere precluding the war.

She is accompanied on her travels by a group of five companions, whom she meets throughout her travels: Calamity, a steadfastly loyal pegasus stallion with a southern drawl, a talent for sharpshooting, and a penchant for scavenging; Velvet Remedy, a kind and merciful unicorn mare with a talent for singing, diplomacy, and medicine; SteelHooves, a stoic earth pony stallion and a Steel Ranger paladin who specializes in heavy weapons and has a wealth of knowledge regarding the history of pre- and post-war Equestria; Pyrelight, a balefire phoenix that takes a liking to Velvet, becomes her pet, and assists the group as a scout and aerial melee combatant; and Xenith, an aloof zebra mare skilled in martial arts, alchemy, and medicine.

The tale is told from the limited first-person perspective of Littlepip (who is also the narrator). With the exception of the Afterword, the story never strays from her point of view and never describes things beyond her perception; even the events of the eidetic memory orbs are described from her perspective and colored with her interpretation and commentary. It is written in past tense, and Littlepip, while narrating, will very occasionally break character to directly address the audience, most notably in the Introduction and on occasion throughout the novel to describe a major change in the storytelling format.

The story itself follows an arcing structure and is split up into multiple arcs, with each arc representing a stage in Littlepip's journey where she is guided with a specific overall objective. The start of a new arc is hinted at in chapter titles; each chapter in which the story arc has radically shifted follows a "The X of the Y" naming convention (for example, "The Hour of the Wolf" or "The Truth of the Matter").

Each chapter is precluded with a quote, often from My Little Pony: Friendship is Magic, and begins with a single word, which could be either narrative or dialogue. At the end of each chapter is a "Level Up" prompt in the vein of a video game RPG, indicating that Littlepip has gained experience and skill. Is followed by a summary of numerical stat increases and abilities (perks) she has gained, a nod to the Fallout setting upon which the world of Fallout: Equestria is inspired.

This section is a stub. You can help Fallout: Equestria Wiki by expanding it.

The story draws inspiration from both the Fallout universe and My Little Pony: Friendship is Magic. It also draws inspiration from other series; for instance, soul jars appear to be very similar to horcruxes from the Harry Potter series, and several story techniques were inspired from their usage in the Babylon 5 franchise, particularly the common usage of Chekhov's Gun. Particular set pieces, as well as quite a few ideas were taken both directly and indirectly from George Orwell's novel "1984", such as The Ministries, headed by the Ministry Mares, and the "Pinkie Pie is Watching" poster, which is a direct reference to the 1984's posters of Big Brother.

The story has been met with near-universal critical acclaim. It has been granted a Legendary tag on Equestria Daily, indicating that it is one of the most celebrated stories in the My Little Pony: Friendship is Magic community. On that same site, its post has garnered over 5,000 comments, maxing out the comment page and requiring the admins to create a spillover comment page.

The series has spawned its own fanbase within the MLP fandom, with fans producing art, music, and video dedicated to the novel, as well as stories that take place within the Fallout: Equestria universe and explore its lore.