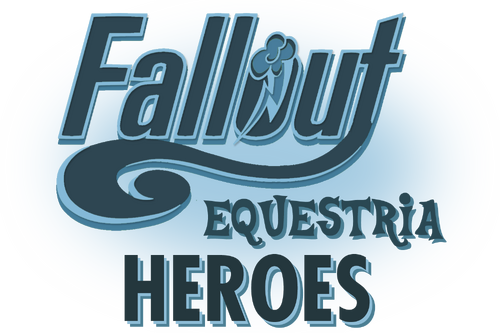 The story of Heroes follows Hired Gun (formerly known as Silver Storm) as she works as a mercenary across the Caledonian Wasteland, trying to make a life for herself. The story is set in Caledonia, a neighbouring state of Equestria and one of its allies during the war.

The plot focuses around Hired Gun (Silver Storm), an Earth Pony mare. After a botched attempt at saving her brother from local raiders she is injured, and is brought to the Bridle Hope Implant Center and Hospital. From then on, she vows to quit acting the Hero, and begins to travel the Wastelands near Dise.

The story can be read over on FimFiction Link

References to other Side Stories

Fallout Equestria - Littlepip's actions and major events like the Enclave arrival in the Equestrian wasteland are mentioned. These stories of Littlepip spurred Hired to try to be a hero. Later on Velvet Remedy's establishment of the Followers of the Apocalypse and Littlepip's shattering of the cloud cover are both confirmed.

Pink Eyes - News on the Radio had Reports of the Pink Ghost, i.e, Puppysmiles. Later on, news of the town of Nightmare's Fall and the death of the Ghost reach the NCA settlement of Snake head.

Project Horizons - Mention of the Security Mare in Hoofington and numerous other minor references to Blackjack can be read in the story. Mr. House mentioned how several promising cybernetics experts left Caledonia to work on Project Steelpony in Hoofington.