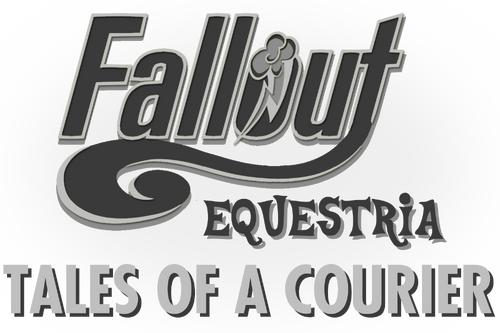 Fallout: Equestria - Tales of a Courier: Reloaded is a side-story of Fallout: Equestria written by a Friendly Hobo. It follows the adventures of Clover, a buck courier who is two-timed in a delivery ending in the death of his brother Shamrock and quite nearly his own.

Tales of a Courier: Reloaded takes place within the Ponave Desert in a world much alike Fallout: Equestria where Raiders and monsters still roam the Wasteland, but a civil war has broken out in the Ponave between the vast ordered government of the Federation, and the freedom fighters of the Resistance, one fighting for dominance and "order", the other for freedom and the rights of pony kind.

Clover and his brother Shamrock are Couriers of the Apple Plains whose delivery job goes very wrong. With his brother dead, and Clover with his skull caved in, it seems to be the end of another pony in the Ponave until a mysterious buck by the name of Snake Eyes digs him from the shallow grave, delivering him to Westwood and it's doctor.

It is only after Clover wakes up with a sleugh of emotional problems and a metal plate in his head does he realize for the first time in his life, what existence in the Ponave means. It is here Clover's search search for Double Down, the buck whom murdered his brother, stole their chip, and left him for dead in a shallow grave. With the help of his companions and friends Ace, Tallie, Lollipop, and more, he can only hope that revenge will settle the score.

But life just isn't that easy. Especially with the demons within.

Retrieved from "https://falloutequestria.fandom.com/wiki/Fallout:_Equestria_-_Tales_of_a_Courier?oldid=45173"
Community content is available under CC-BY-SA unless otherwise noted.