Side stories that have been missing a working link for a long time may become candidates for deletion. 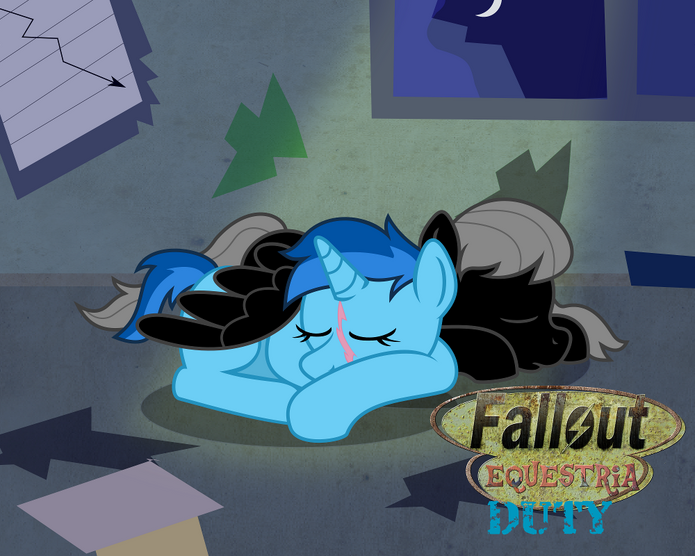 Duty is a Fallout Equestria spinoff story, written by VisualPony. Currently, the story has 32 chapters and 158,578 words in total.

Fallout Equestria: Duty follows two former equestrian special operations soldiers. Vice-General Frostmane and her second in command, Major Firestorm. Both of them find themselves in the wasteland, after having been ordered to enter stasis and wait for further orders.

Soon after they emerged from stasis, they have to defend themselves against soldiers of the Grand Pegasus Enclave, who try to hijack their airship, the Luna Dream. Afterwards both mares find themselves confronted with the results of the war they partcipated in, and have to ask themselves if what they did 187 years ago was really right, or if they helped commit a crime against ponykind.

Fallout Equestria Duty is set 13 years before Littlepip left Stable 2. The main characters travel all over the wasteland, encountering fellow survivors of the apocalypse and helping wherever they can. The story is told from three perspectives. Frostmane, Firestorm and Homage aka DJ PON-3.

Retrieved from "https://falloutequestria.fandom.com/wiki/Fallout_Equestria:_Duty?oldid=45555"
Community content is available under CC-BY-SA unless otherwise noted.