Gawdyna Grimfeathers (a.k.a. Gawd) is a supporting character and faction leader in Fallout: Equestria.

Gawd is the battle-scarred leader of Gawd's Talons, a Griffin mercenary company. She has a wealth of combat experience, having fought in numerous battles from a young age.

She has proven to be a powerful ally to Littlepip since then, aiding the residents of Stable 2 when they fell under attack from the Steel Rangers and the townsponies of New Appleloosa when the Enclave attacked.

Following the attack on New Appleloosa, it is revealed that Gawd has two children, Reggie and Kage.

As time goes on, Gawd realizes that she is no longer in the peak physical condition needed to be a successful mercenary and decides to create a permanent settlement. The New Canterlot Republic and Junction Town are both a product of her vision to create a place where all wastelanders could live together.

Appearances in other stories

While recording his conclusions on Puppysmiles's journey down Route 52, Watcher hoped to talk to Gawd about the Talons pursuing Henrietta Firebright. He hoped to get the talons to leave her alone, perhaps creating some form of truce between them.

Gawd hired Mach to scout out a mountainside stable for her. She also informed him of the bounty placed upon him by the Enclave. Gawd was also involved in helping Razorbeak found the Obsidian Equestria talon company.

Gawd is a middle-aged female griffin with a notably large scar running across her face. Despite this, Littlepip finds her highly "impressive" for a griffin, which may imply that she's still attractive. She also may look young for her age as Littlepip is greatly surprised that Gawd is old enough to have teenage children; though the unicorn also freely admits to having no frame of reference to accurately judge.

Gawd is a mercenary of higher moral standing than most. She doesn't enjoy being in anypony's debt, and does whatever she can to pay them back as soon as possible. Gawd is known for staying "true to the contract", fulfilling her obligations to the letter.

Like all griffins, Gawd can manipulate clouds and fly. She is also a skilled mercenary with years of combat experience, capable of leading large groups of ponies and griffins. 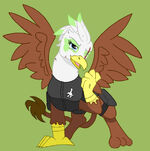 To the Contract, To the Caps by IrkenGeneral