Homage is a steel grey Unicorn with a blue mane. Homage is first seen in Chapter 16 but in reality she has been on the radio as the guise of DJ Pon3 since before the opening of Stable Two. She acts as the Voice of Freedom in the Equestrian Wasteland and offers warnings of the dangers as well as telling people the news of heroic activity, most particularly Littlepip's feats. The day Littlepip first met Homage she thought of her as nothing more than another pony trying to see DJ Pon3 only to realize that she is the current DJ Pon3, the mantle having been passed down to her. As their time in Tenpony Tower together progressed Homage fell in love with Littlepip, answering her when she was looking for another mare that would love her in return with "I might..." thus beginning their relationship.

Little is known about Homage's past. She is seen to have a special weapon called the Star Blaster and has complimented herself being it is the only good weapon she could use. She was traveling with Jokeblue before Tenpony Tower but due to some unfortunate mishap she did not survive the wasteland.

Homage is the current DJ Pon3 having the mantle passed down to her when the previous DJ retired or died. She uses her Unicorn magic to change her voice into a more masculine tone to hide her true voice on the air. To the ponies of Tenpony Tower they see her as nothing more than the DJ's errand girl as she was for the previous DJ before the latter. Being the DJ means that she plays a variety of decades old music ranging from Sapphire Shores, Sweetie Belle and possibly more, to more recent records that were collected for her by Littlepip or recorded for her by Velvet Remedy.

Homage is a good-nature pony who wants nothing more than to bring light and happiness back into the Equestrian wasteland. She chooses to do so by spreading messages of hope and guidance as DJ Pon3, as well as reporting on recent events. She is willing to tell the truth to her listeners at all costs, even risking her life when the Enclave invaded.

Homage seems to know a lot more than she initially lets on. Often times she is seen trying to embarrass Littlepip in front of her friends (referring to things such as Bondage and "31") and is quite successful at doing so. This does not take away from the fact that she is a strong willed pony and is willing and able to defend herself when need be. She is very passionate about what she does, has great courage, and seems to have a clear objective on her goals in life.

As stated above, Homage lives in Tenpony Tower posing as an errand girl for DJ Pon3, when in fact she is DJ Pon3 himself. She first appears as Homage in Chapter 16, but has been previously introduced as "DJ Pon3" from the beginning of the story, when Littlepip leaves Stable 2 for the first time. Homage is considered to be quite attractive. She is a Steel Grey Unicorn with a very Small Frame similar to Littlepip. Homage adorns herself in dresses and jewelry to cover her cutie mark or hide any indication that she would look like DJ pon3 (DJ pon3 having a male alias is a useful tool as well). To cover herself she would prerecord news segments and go out to be "seen" in public almost ensuring her secret is safe to most ponies not familiar to Tenpony Tower.

Homage had a "delinquent youth" and learned to fend for herself both in Tenpony Tower and in the Manehattan ruins. She learned how to cook well, how to repair weapons, and how to hack into terminals for what she wanted or needed. She possesses some skill with energy weapons and at one point owned an Alien Blaster.

She probably knows a fair degree of spells, but her only witnessed one is the voice-gender-change spell, handed down from one DJ-Pon3 to the next.

Littlepip - In a relationship with Littlepip, both are deeply intimate with each other. Homage and Littlepip both consider the other to be "her light in the darkness."

Calamity - Knows Calamity through Littlepip. Friendly with him.

Xenith - Very courteous and friendly with her, not at all mindful of the bad blood between Zebras and Ponies. She even tries to help Xenith be accepted in Tenpony Tower.

Homage possesses the traits Small Frame and Wild Wasteland. The latter accounts for her unique experiences in the wasteland, including seeing ghosts, meeting Doctor Whooves and finding the Star Blaster.

Her alias, DJ Pon3, while being a original Friendship is Magic character, is also based off of Three Dog from Fallout 3. Both run a radio station, have similar dialogue, and both give shout-outs to the protagonist. It is also humorous to note that both of them include the number 'three' in their names. 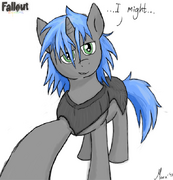 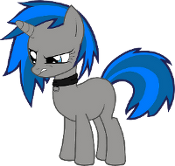 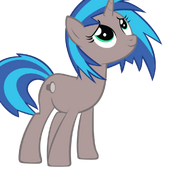 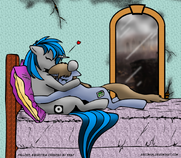