Mister Topaz is a minor character in Fallout: Equestria.

Mister Topaz is a dragon living beneath the Shattered Hoof Re-education Facility. He is a relatively young juvenile dragon who leads the Shattered Hoof Raiders along with his subordinate, Deadeyes. Topaz oversaw operations and hoarded the gemstones mined at the facility. During the battle at Shattered Hoof, he attacks Littlepip after she stumbles across his cave. Littlepip is rescued by Calamity, wielding a plasma cannon who temporarily incapacitated Topaz, allowing Calamity to carry Littlepip to safety. Topaz pursues them and is killed after she forces several grenades down his throat.

Topaz was a young, orange scaled dragon. He had a pair of flightworthy wings. He was big enough to kill and eat a pony with ease.

Topaz is cruel and very self confident. He openly mocks Littlepip and ponies in general, considering them nothing more than food and servants. His arrogance led to his undoing, as he repeatedly toyed with Littlepip, giving Calamity a chance to ambush and seriously injure him.

As a Dragon, Topaz can ingest gemstones as a source of food. He is also fully capable of flight and breathing fire. He is very secretive, being careful to limit knowledge of himself, Deadeyes being one of the few ponies to actually see him before he pursued Littlepip and Calamity. As a dragon, he is also incredibly powerful to the point where grenades exploding in his gullet would normally have not even fazed him, if not for the injuries caused by Calamity's plasma cannon. 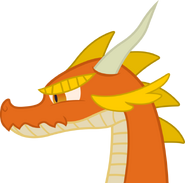