P-21 is an emotionally scarred, light blue male earth pony. He is one of the main characters in Project Horizons, and a member of Blackjack's group of Wastelanders.

P-21 is not the name he was given at birth, but being a male in the female-dominated Stable 99, his name was taken from him when he reached adolescence. He was one of twenty earth pony males that were kept as nothing but breeding companions, along with twenty unicorn males. As the oldest breeder, he was due to be eliminated to make way for a new P-1, so his designation became P-21. He was attempting to hide from this fate when he was discovered by Blackjack. After the Stable was betrayed by the Stable's Overmare and a group of Raiders invaded, P-21 escaped along with Blackjack.

He and Blackjack would continue to pursue EC-1101, meeting several others who joined in on the quest. This would include his daughter, Scotch Tape, who he would eventually build a relationship with.

He is eventually killed on the moon while fighting Cognitum, being impaled and then exploding.

P-21 is a male Earth Pony sporting a blue coat and mane, with storm grey eyes. He is described as being quite small, along with many of the other males in the stable, though is described as well toned for his size. He has a feminine appearance, as seen when Blackjack mistook him for a mare early in the story, and when he was able to pass himself off as a mare to fool a group of bounty hunters. His cutie mark is unknown as it was covered with the symbol for a breeding stallion inside Stable 99.

After first escaping to the Wasteland, P-21 frequently displays a stoic, though sometimes confrontational, personality. While he is generally kind to those in need, unlike the more naive Blackjack, he tends towards caution and suspicion when dealing with unknowns. He noticeably shows more suspicion to mares, especially those from Stable 99 as he is unable to completely forget what happened to him on the breeding queue. Despite this, he is a caring pony, and a loyal friend, having been pushed to all sorts of limits while traveling with Blackjack.

He is prone to bouts of extreme moral judgement, where he attempts to install his ever-changing and highly circumstantial moral and ethical values on everyone else in the Wasteland, mainly using Blackjack and co's fire-power to make people see things his way. Despite a strong desire to see justice done against those who abuse or harm others, he admits that he has great difficulty seeing and doing the right thing for others in the same way Blackjack does, a trait that has frequently left him in awe.

P-21's sexuality is also complicated; he seems to have a preference for stallions as he was in a relationship with a stallion named U-20 in the Stable and later with Priest, and has also shown a physical attraction for Calamity, Star Paladin Stronghoof and Stygius. He was, however, a part of Stable 99's breeding program, which conditioned colts that they were there to service mares to the point of reflexive action; this could offer an explanation for his confusion when it comes to mares; a subconscious side of him still believes this propaganda. Despite his continued revulsion of most mares, following three bottles of champagne at the Gala held by the Society, P-21 had sex with both Blackjack and Morning Glory (who was herself conflicted about her sexuality due to being in heat) after a long night of the three partying. Despite the awkwardness he and Glory felt the next morning, he privately admitted to his daughter it was the happiest he'd been in a long time when she confronted him about it.

It seems that much of his commonly "grumpy" personality may be the result of the chronic pain he suffers from both a leg injury sustained prior to his escape from Stable 99, as well as his earlier treatment by Stable 99 Medical in general. Blackjack becomes aware of this after discovering his hoarding of Med-X, and later by experiencing his day-to-day aches when viewing a memory orb from his perspective.

P-21 has high Science and Lock Picking skills, having spent most of his life attempting to figure out a way to escape his Stable. Once he escapes with Blackjack he is shown to also have high Explosive and Sneak skills.

He will not hold a firearm because he fears he won’t be able to control his urge to shoot Blackjack. Instead he prefers to sneak around the side lines using mines and explosives. He claims that because they require him to think in order to use them successfully, he can avoid his urges to kill her. Later he acquires the grenade rifle Persuasion, which becomes his weapon of choice. He is also shown disarming a Balefire Egg bomb and creating satchel charges using other explosives.

Blackjack - Originally grew up with her in Stable 99 and attended classes with her until he reached a certain age to become a P-1 and was segregated away from mare classes; facts that Blackjack herself had forgotten due to the monotony of life within the Stable. While he cares deeply for Blackjack, P-21 remains scarred by the experience of witnessing her murder his lover, U-20, as well as his experiences with her on his breeding queue when he was P-1. This makes him stern and cold towards her at times, and he even refuses to carry firearms for fear that he may attempt to avenge him. Despite this, he clearly has a deep respect for her and her moral strength, as was demonstrated when she refused to kill the Mine Boss at Brimstone's Fall and when she let the ponies who raped her leave unharmed.

Morning Glory - When Glory joined Blackjack and P-21, she brought with her a wide-eyed idealism about the way the Wasteland should be. It conflicted with P-21's cynical and untrusting nature, putting the two at ends, and leaving Blackjack to make major decisions. As the story progressed, they eventually formed a friendship and understanding, learning to resolve their conflicts faster and agree much more easily. Glory occasionally scolds P-21 for his depressive nature, especially around Scotch Tape, but is otherwise friendly towards him.

Rampage - P-21's relationship with Rampage can be hard to pin down, as Rampage herself can be hard to pin down. There is obvious mutual respect between the two, but the striped mare's shifting personalities can often cause P-21's to shift as well. The two are also capable of talking about personal issues easily though, which Rampage claims is because of the similarities in the abuse they both suffered in their earlier lives.

Scotch Tape - P-21 is Scotch Tape's father, and for a long time he hid this from her, believing that he wasn't fit to be a dad. After she almost died, however, P-21 revealed the truth. Since then, they have forged a much stronger father-daughter bond and spend a lot more time together. The two are undoubtedly related and share similar traits such as lockpicking and a knack for technology.

Priest - During their visit to Chapel, Blackjack nearly walked in on P-21 and Priest "exchanging pleasantries" outside. From that point on Priest has been the primary love interest of P-21. This was short lived, as Priest was killed by Sanguine when he took over Chapel. 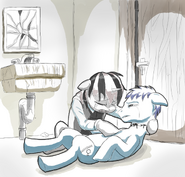 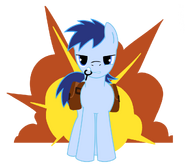 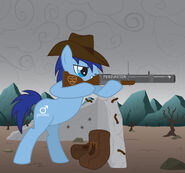