Power armor as the name suggests is armour that is powered to allow easier movement in heavy armor. There are a few variants of Power armour used by different factions.

Power Armor was first developed by the Ministry of Wartime Technology, under close supervision by Applejack herself. The Power armor was built by Applejack after the death of her older brother, Big Macintosh.

The Zebra, in response to the Power Armor now being worn by the Equestrian troops, developed the Zebra Rifle, a weapon that would enchant bullets and ignite their targets. The rifle became particuarly feared and infamous by the Steel Rangers as it could pierce the armour and incinerate the Ranger inside.

Applejack also tried to stop research into weaponry that could pierce power armor, being done by private companies. Given how she had designed the armor to save lives and the Zebra empire would undoubtedly find a way to get their hooves on anti-power armor weaponry.

Steel Ranger power armor wasn't built with unicorns in mind. The helmets left no room for a slot that a unicorn could fit their horn into. The armour was built for use by Earth Ponies which makes sense, given that the armour was designed by Applejack, an Earth Pony.

Rarity worked with Rainbow Dash to create Power Armor specifically designed for Pegasi. The Armor is lighter than the Steel Ranger armour, worn by Steel Rangers, but the Pegasi Power Armor had magical energy weapons equipped into their battle-saddles.

Steel Ranger armor is used by Earth Ponies and Unicorn members of the Steel Rangers. A unicorn has to cut off their horn to wear a helmet. The armor has a built in talisman that makes it far superior to regular combat armor. For example, the Steel Ranger power armor comes with a built in regenerative talisman, that converts scrap metal, inserted into a port on the armor, into usable metal that repairs/regenerates the armor automatically.

The helmets have a built-in E.F.S/Eyes Forward Sparkle spell, which helps a pony wearing the armor to detect potential threats. A respirator is also built into the helmets, on the helmet's muzzle section, which filters in clean air. Steel Ranger armor typically has heavy ballistic weaponry fitted into the battle saddle, like grenade launchers, rocket launchers, and machine guns.

Steel Ranger armor also has powerful pistons built into the legs and joints, which provide more powerful physical attacks. An opponent that specializes in hoof to hoof combat wearing Steel Ranger power armor can be a particularly deadly opponent.

The armor has thick plates that cover vital organs and body parts, and beneath that, a layer of tough material that can resist lower calibre weaponry. The armor is equipped with a vicious blade on the end of the tail, giving it a scorpion-like appearance.

The Enclave armor does leave the mouth and face of a pegasus much more exposed than a Steel Rangers suit of power armor. It is also lighter which means a pegasus, in theory, can move much more quickly than a pony inside Steel Ranger power armor.

The mouth of a Pegasus in power armor is sometimes covered with a respiratory mask to protect against contaminants from the surface of Equestria, like the respiratory devices on the Wonderbolts Power Armor.

Power Armor was also built in Griffin models, designed to be worn by Griffin mercenaries during the war. It is likely the armor was produced by Equestria as other war-era nations like the Zebra Empire never developed similar technology. The armor offers greater protection from various forms of weaponry, but seems to be more restrictive. Butcher wore Griffin Power armor that lacked wing and leg/forelimb protection. This allowed for greater mobility in battle. It likely also helped her carry her heavy weapon, a dismounted anti-air cannon.

Portrayal in Side Stories

Ponies wearing power armor have also cropped up in side stories, examples include. 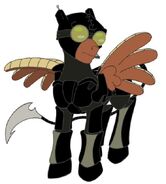 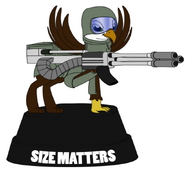 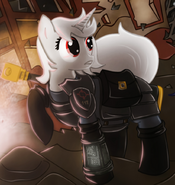 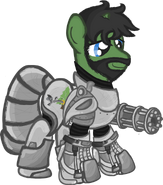 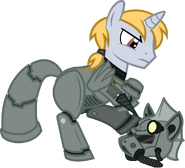 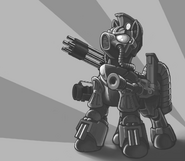