Red Eye is a male Earth Pony with a crimson coat and a jet black mane. He comes from a Stable just as Littlepip did. He is one of the main antagonists in Fallout: Equestria.

Red Eye grew up in Stable 101. His Stable offered medical and technological advancements far in excess of even pre-war civilization. Ponies in the highest ranks of Stable-Tec conspired to make Stable 101 an experiment in rulership through the earth pony way. Red Eye firmly believed that the Stable inhabitants were being close-minded, hoarding technology and medicine. He believed the stable's inhabitants weren't following Stable 101's core belief of earth pony leadership and so he wiped out the residents of Stable 101, with the exception of Winter, Doc Slaughter, Doctor Glue & Gizmo.

Red Eye gathered a massive army, took over Fillydelphia as a base of operations and used his intelligence and charisma to win many ponies and griffons to his cause. He established the slave trade or at least became the biggest buyer of slaves and used the slave labour to begin restoring Fillydelphia, with the eventual goal of restoring the Equestrian Wasteland. Red Eye made contact with The Goddess sending her unicorn slaves and making unicorns valuable targets in the slave trade, she in turn, sent Red Eye Alicorn drones to assist him. He also established the religion of the Unity, constructing the massive Cathedral in the Everfree Forest over the remains of his home stable. It is also mentioned that Red Eye visited Canterlot and had the stained-glass windows depicting famous scenes from history, like Discord's defeat, installed in the Cathedral he was building.

Red Eye is a major power in the Equestrian Wasteland, the majority of slavers work for him and he has ties to certain settlements, such as New Appleloosa. Red Eye also sends out radio broadcasts across the wasteland, transmitted via radio and Sprite-bot, the only other radio station being Dj Pon3's. Red Eye ceased sending the Goddess unicorn slaves about a year ago.

Red Eye's influence is first seen near Shattered Hoof ridge, where a small army of his slavers are waiting for the chance to take over Shattered Hoof Ridge from Mr. Topaz. His army failed, being caught in a three way battle between Gawd's Talons and the Shattered Hoof Raiders. Red Eye blocks DJ Pon3's radio signals from entering Fillydelphia, which is something the disc jockey Homage wants Littlepip to put an end to. Littlepip sneaks into Fillydelphia, disguised as a slave and watches Red Eye give a speech and ask for 'Volunteers' for the Pit.

Red Eye oversees the Pit, an arena with weapons, I.M.P vats and traps where two ponies fight to the death. He watches Littlepip escape and sends his cyberdog to help capture her when she escapes along with the zebra slave/gladiator Xenith. He meets with Littlepip and agrees to let her leave Fillydelphia in return for Stern who was captured by the rest of Littlepip's friends and for Littlepip's help in killing The Goddess.

Red Eye begins devoting his forces to scouring the Everfree Forest, burning away the native wildlife and plant life, he also trades a water talisman with New Appleloosa for the Balefire Bomb that they got from Silver Bell when she was adopted by Ditzy Doo. Red Eye's forces surround Tenpony Tower whilst Littlepip is in Canterlot retrieving the Black Book for the Goddess. Littlepip and Red Eye discuss a plan to kill the Goddess via Radio after Pip uses Party-time Mint-als and he cooperates, sending her the Balefire Bomb he acquired from the New Appaloosians.

Red Eye traps the Wonderbolts and Littlepip's group in Everfree Forest by using the alicorns who joined him after the Goddess's death. Later Red Eye's ultimate goal is finally discovered during the Enclave assault on the Cathedral when he reveals his plans to become like the Goddess but by using a pony from each species. He specifically wants to use Autumn Leaf the Enclave general, Littlepip a powerful unicorn and wasteland hero, and himself an earth pony to form a new unity and wishes Littlepip to aid him and willingly become part of this new unity. He tried to become a new God but was stopped by Littlepip, who also managed to stop him from using unicorn disciples in nearby cages much to his ire. He was killed during the battle for the Cathedral by a group of Hellhounds under Enclave control.

Later his cybereye which was also a data storage device was recovered by the Alicorns beneath the remains of Cathedral, the Alicorns no longer wish to be ruled any longer by Red Eye or their late Goddess. His eye is presented to Velvet Remedy as an offering in hope she can use the data on it to find a way for Alicorns to proliferate naturally, she dismisses using the data, claiming that they would find a better way.

Red Eye was a strong, able-bodied earth pony stallion with a crimson coat and a few light scars around a blank flank where his cutie mark should have been. He had a jet black mane and tail which were groomed in a practical manner, and he wore a black cape that was slung to droop off his right side. His left eye was blue whilst his right was a glowing red, cybernetic one.

Charismatic, with oily smooth words and is very persuasive. Red Eye sees himself as the pony that does what needs to be done, even if his methods are cruel and forceful. Red Eye has shown to be very resourceful and diplomatic, able to win many Griffins to his cause, and the Goddesses' Alicorns too after the death of The Goddess at Littlepip's hoof.

The Goddess - Red Eye was sending her Unicorns, but stopped about a year before Littlepip emerged from Stable 2. He anticipated her betrayal, and recognized the threat she posed, thus sending Littlepip to kill her first.

Stern - A black-colored griffin, with a white-feathered head. She is his second in command.

Littlepip - Red Eye viewed Littlepip as a tool that he could exploit, noting that they had similar goals, like saving Equestria, but has vastly different methodologies about how to accomplish those goals. Nonetheless, he does respect and trust her, and was willing to let her be his moral compass should he cross the line. 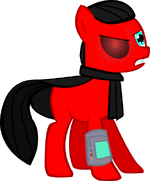 Appearances in Other Stories

Red-Eye is a minor antagonist in the early chapters of Project Horizons. His forces are seen collecting slaves and transporting materials to the rest of Equestria.

Red Eye is the often mentioned, rarely seen, master of all of Fillydelphia. Protoge was his dedicated pupil who sent him letters in the same manner Twilight sent friendship reports to Celestia.

Red Eye personally met Murky Number Seven to pass judgement upon him for attempting to escape a second time. Despite Protoge's eloquent defence it seemed Red Eye had his own reasons for keeping Murky alive. Unless, of course, Murky became more trouble than he was worth. After Glimmer read Protoge's diary, Murky learned that Red Eye's plan for Unity required a back-up pegasus in case his schemes with the Enclave didn't work.