A Sentinel is a heavily armed security robot, built during the great war to defend private and government property.

Sentinels are heavily armed robots, carrying at least three mounted weapons. A chest mounted minigun and a missile launcher turret are common in these robots. Littlepip encountered one of these in the Four Stars offices in Manehatten and disabled several that were in service of the Steel Rangers at Bucklyn Cross. Their big brothers, the Ultra-Sentinels, were also encountered in the Ministry of Awesome Canterlot hub.

Appearances in other stories

Puppysmiles is attacked by four of these robots. She manages to defeat them all with ease.

One of these robots guards the Junkyard for Scraps.

Sentinel robots were guarding T.I.T Stable VII. One of these robots had armor piercing rounds instead of regular ammunition.

A sentinel named Spicy Meatball is encountered in the ruins of Green-Med Pharmaceuticals and is briefly controlled by Vial's Technokinesis. It is later reprogramed to accompany Binary Bit and Vial as they go out to uncover the Calzone's secrets. Spicy is incapacitated by a series of missiles form Eighty-Six's Sixers when confronting Vial and Binary, though is presumably fixed and reprogramed (again) to change its personality by Turing Test.

These robots are very large, they move on four legs, each leg having a treaded ball that is used to move. They have a vaguely ponyesque appearance and usually have two to three weapons equipped. 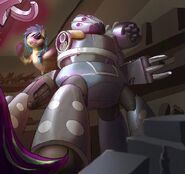 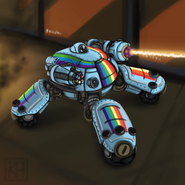 Ultra-Sentinel robot by icekatze
Add a photo to this gallery
Retrieved from "https://falloutequestria.fandom.com/wiki/Sentinel?oldid=45856"
Community content is available under CC-BY-SA unless otherwise noted.