Skyfire is a pegasus mare and one of the main characters of Fallout: Equestria - New Roam. She was with the Grand Pegasus Enclave, specifically a scouting party headed to Roam to evaluate it's potential threat. She is initially driven by a vendetta against the Legion following her squad's death.

Most of her history in and with the Grand Pegasus Enclave is mostly unknown. What is known is that she served in the Enclave military's Expeditionary Corps as part of a surface team. Sometime during her service in the Corps, she had met and presumably formed a relationship with fellow surface team member Breezetail. It was from him that she and her surface team learned to sympathize with the plights of the surface-dwellers, an act which was frowned upon by their superiors. Following a massive energy spike that ran through Roam's mountains, Skyfire's team was sent in to investigate.

Skyfire was sent to Roam with other pegasi by the Enclave, specifically to assess Roam's potential to threaten them following a massive surge of energy in the mountains. Upon arrival, however, they were quickly antagonized by the Legion for reasons unknown, and after some fighting were shot out of the sky. They crash landed in Road Town just as Goldwreath and Conductor were having a meeting, and the town fights off the Legion to save her.

Skyfire, after waking up from her unconsciousness, immediately turns hostile on the town and threatens the local doctor. Goldwreath's timely interjection spares the town from losing another individual.

After convincing the others to allow her to go along, Skyfire accompanies Myst and Goldwreath to clear Decarius' house of bandits, which turn out to be working with the Legion.

Wanting revenge on the Legion for the loss of her squad, Skyfire accompanies Goldwreath and Myst, along with Zaita, on their mission to the Forum.

Skyfire is a yellow/light orange pegasus mare with a cutie mark described as a "metal sword pointing down in between two wings, each flaming with a brilliant orange-yellow fire." Her mane is designed like flame, with the interior of her mane and tail being dark orange while the outer portions is light orange.

Skyfire is a hot-headed, stubborn, generally unthinking mare with a great desire for vengeance. On more than one occasion has her act-first and think-later manner of dealing with problems come up, and on almost all occasions resulted in some kind of backfire against her.

In combat, Skyfire prefers to go head-on against the enemy and annihilate them with rapid bursts from her twin Plasmabolt rifles. This often leads to some tremendous backfire, however.

Skyfire did NOT like the Enclave's attitude towards the surface, and joined a group of other pegasi who didn't as well. It was in this group that she met Breezetail, her former love interest until he died.

For a great portion of the early chapters, Skyfire's only true motivation is revenge. This has led to a confrontation with Goldwreath over the matter of forgiving one's enemies. Skyfire says that she will attempt to improve, but will not make any promises, much to her fellow pegasus' dismay.

Another side of her is shown, however, when Predator unofficially joins the group: Skyfire's more emotional side, specifically her fondness of Goldwreath. According to her, Goldwreath resembles another stallion whom Skyfire liked in the past for his bravery and self-sacrifice, as well as his intolerance for the Enclave's discrimination against the surface. This has lead to Goldwreath to question whether Skyfire's desire to accompany them was genuinely because of her desire to help the surface, as she states, or because of her liking for him.

As of the chapters after the revealing of her secret, Skyfire has tried on several occasions to sympathize with Goldwreath on problems, possibly to earn his favor.

Skyfire's combat style revolves around overwhelming firepower, and is reflected by her use of her twin Plasmabolt rifles. This is why she is annoyed when Goldwreath asks her to do scouting detail instead.

Sally - One of her two plasma rifles, which fires quicker than it's counterpart, Mercedes, but has less power per shot.

Mercedes - The other of her plasma rifles. Fires slower than Sally, but has more power.

Submachine gun - She gets an SMG just because Goldwreath doesn't want her to rely on her rifle's limited power supply.

Eventually she also gets an armored tank crew vest.

Myst - Her relationship with Myst is friendly, even if they did start out on the wrong note. Despite their near-polar opposite personalities, both mares have managed to overcome that barrier and have since been there to comfort each other when an event prompting their emotions occurs. She may not know it, but she and Myst are competing for Goldwreath's affections. Skyfire has apparently accepted that she has lost Goldwreath's attentions to Myst, but doesn't seem to hold a grudge.

Predator - Hated him initially, due to what the operative did and said to her friends when she was absent. However, when she sees Goldwreath's forgiveness for him, she concedes as well. This leads to the question as to whether or not her hatred of him was genuine. As of yet, they are on neutral terms, despite Predator revealing her secret.

Zaita - Skyfire was initially suspicious of the AI, believing her to be a Legion construct. At Goldwreath's request, she manages to give Zaita a chance. Seeing that Zaita has had many opportunities to let them die, and she didn't, Skyfire assumes that the AI really does want to help them, and has since come to more friendly terms with her.

Goldwreath - Goldwreath and Skyfire share a fairly friendly relationship, with the former originally viewing her as a mere friend, while the latter already had interest in him from the start. Their relationship is made awkward when Goldwreath finds out Skyfire's secret. Still, they are on friendly terms. After Goldwreath talks to Skyfire about her problems of feeling useless and miserable, the two manage to come back together and on far friendlier and knowledgeable terms than before.

Doodle - Skyfire and Doodle share a neutral and somewhat indifferent relationship, though the filly has gotten Skyfire to open up to her at one point. 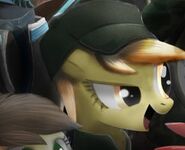 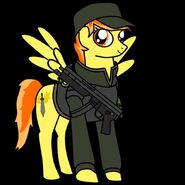 Add a photo to this gallery

Retrieved from "https://falloutequestria.fandom.com/wiki/Skyfire_(New_Roam)?oldid=29679"
Community content is available under CC-BY-SA unless otherwise noted.