Sorbet is an earth pony mare who is rescued by Riptide near the small island home of the Reef Dwellers.

Sorbet was sent out by her Stable to perform a secret operation, she brought her daughter Éclair with her. Whilst exiting the mainland Equestria, they had to pass the environmental barrier at the edge of Oceania, the powerful storms heavily damaging their boat, nearly drowning them. Riptide discovered the two mainland ponies in the wreckage and dragged them to safety.

Sorbet was injured and the Reef Dwellers were incapable of providing her with full medical care she needed. She had to rest in the group's boat, unable to help Riptide or Éclair as they piloted it towards new locations. After Sorbet found medical aid in the settlement of Steam Town, she continued on her journey to the Summer Sunset Isles, later revealing her reason for passing through the Storm Wall to Riptide.

Éclair - She is Sorbet's daughter and both care about each other greatly.

Riptide - She respects and trusts Riptide as a friend and has grown to appreciate him.

Sorbet is an orange coated mare with a red mane. She has blue eyes, and her cutie mark is scarred from a past injury, but still shows a golden compass. She currently wears her Stable Uniform with a Leather Duster over it. She still wears the bandages that covered her injuries from the boat wreck.

Sorbet is a excellent markspony while using rifles. The majority of kills she achieves have been due to an accurate head-shot. She is also a competent leader. 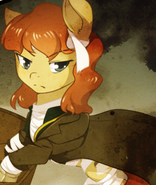 MyLittleSheepy
Add a photo to this gallery
Retrieved from "https://falloutequestria.fandom.com/wiki/Sorbet_(Dark_Shores)?oldid=45621"
Community content is available under CC-BY-SA unless otherwise noted.