The star blaster, whilst not the most destructive weapon in terms of area of effect, should be considered among the most powerful weapons in the wasteland. Zebra were shown as recognizing Star Blasters, when Xenith warned Homage not to use it or rely on it, though this could have been paranoia relating to anything from outside Equestria i.e, the stars or Xenith recognized the material it was made from.

The Star Blaster is a weapon of unknown origin, theorized to have been constructed by a highly advanced alien species, even more advanced technologically than Equestria before the Last Day.

The Star-Blaster uses unique power cells, not easy, or not at all imitable by the ponies of the Equestrian Wastelands. The Enclave however had a cache of power cells, hidden above the clouds, before Calamity looted the cache.

The Star blaster fires off bolts of disintegrating magical energy than can easily eat through shield spells and hit the desired target. The target is vaporized, leaving behind a pile of ash. A single blast can instantly kill an alicorn with its shield up. If a target isn't vaporized, they are likely killed by the force/energy of the blast.

Usage as an explosive

The weapon can be jury-rigged to explode as shown by Homage, who left the Star Blaster as part of a trap in one of the towers controlling the weather over Equestria. The weapon detonated with such force, it actually managed to destroy the tower and any Enclave Pegasi hunting for Homage. 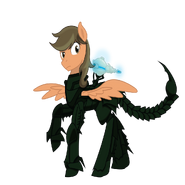 GeekLadd
Add a photo to this gallery

Retrieved from "https://falloutequestria.fandom.com/wiki/Star_Blaster?oldid=46020"
Community content is available under CC-BY-SA unless otherwise noted.