SteelHooves (real name Applesnack(c.15)), introduced in Chapter 14, is a ghoul(c.15) earth pony stallion and a main character in Fallout Equestria. He is a member of Littlepip's party of wasteland wanderers, serving as the party's heavy weapons specialist. He is also a member of the Steel Rangers, where he holds the rank of Star Paladin.

As part of Littlepip's party, SteelHooves performs the role of a heavy weapons specialist and tank, primarily using missiles and grenades to dispatch foes as well as enduring attacks which would otherwise kill the others. He also serves as the party's primary source of information, being highly well-versed in the pre-war history of Equestria.

It is unknown what SteelHooves' life was like before the war began.

Applesnack served in the Great War under the alias of Sergeant "SteelHooves" Applesnack. During this time, he became Applejack's love interest. It is unknown how they met. He met the other Ministry Mares at Pinkie Pie's last party in Stable 29.

SteelHooves fought in most of the war as part of the same squad as Big Macintosh. When Big Macintosh died saving Princess Celestia from an attempted assassination, he and his fellow comrades were struck with a deep blow. Because of this, Princess Luna ordered all soldiers to be stationed closer to Canterlot after the Battle of Shattered Hoof Ridge. Applesnack was given a break from the war, being stationed in Zebratown to act as a peacekeeper.

He then left the town, volunteering for a special assignment with the Ministry of Wartime Technology, hoping to never set hoof in Zebratown again. This special assignment involved the creation of the Steel Rangers and his part playing the role as the very first to don the iconic Power Armour.

On the night Applesnack was planning to propose to Applejack, he came across Applejack's zebra friend Zecora apparently stealing secrets from the Ministry of Awesome after having murdered a guard. Unknown to him, her apparent treachery was part of a plan devised by Rainbow Dash and Pinkie Pie to set Zecora up as a double agent. As part of her cover Zecora was to give information from the ministry to the Zebra Caesar to increase his trust in her. She had intended to merely disable the guard who had helped her but accidentally struck him with too much force.

Applesnack was driven to a blind rage and attacked her. She attempted to surrender but he was beyond listening. She attempted to defend herself but he deliberately beat her to death. Moments later Applejack came on the scene and saw him standing over the bloodied corpse of her friend, severely straining their relationship.

When Canterlot fell under siege from the zebras, SteelHooves and Applejack were evacuating everyone they could from Zebratown. After word came that Cloudsdayle was destroyed, Applejack ordered SteelHooves to stay and help evacuate in her absence because she knew he had been stationed there before. Celestia and Luna had put a shield around Canterlot, but when they were killed by the Pink Cloud, the shield collapsed, releasing the Pink Cloud upon the town and killing everyone that was left.

SteelHooves survived as a Canterlot ghoul, but the effects of the Pink Cloud had fused his armor to his body, preventing him from ever removing it again.

In recent history, he refused a leadership position of some form, leaving that responsibility to Elder Cottage Cheese. There is evidence that he has encountered the alicorns of the Unity Project on many occasions, or at least enough to earn the title "Mighty Alicorn Hunter".

Sometime after Littlepip's emergence from Stable 2, SteelHooves met her at his shack while she and her party were being attacked by alicorns. He was heavily injured and immobilized in an attempt to rescue her, but was later healed and revived. He then chose to travel with Littlepip as a member of her party. He revealed later that his true purpose initially was to assess the threat that she and other stable-ponies posed, but he later grew to admire Littlepip for her steadfastness in protecting and aiding other ponies. As Littlepip learned more and more of SteelHooves' past, the two eventually formed a strong bond.

SteelHooves became the leader of Applejack's Rangers after the Battle at Stable 2. It was in Stable 2 where he finally made peace with himself, thanks to the knowledge that Applejack forgave him and loved him to the very end. Although he left Littlepip's group for a short while to serve his duties to Applejack's Rangers, he eventually chose to follow Littlepip once again.

He later died at the claws of a hellhound outside Maripony, decapitated. His death caused great grief and sorrow to his companions, and he was buried at his shack outside of Stable 29. His Applejack statuette was placed over his grave to signify they would be together forever.

Both Littlepip and Velvet Remedy consider themselves responsible for his death, and it was a contributing factor to Velvet Remedy leaving the group for a period of time. SteelHooves's position as a mentor and adviser to Littlepip was never forgotten, and later on she often ponders over what he would have done in her place.

Little is known about his appearance, mostly because he is permanently encased in his armor. However, it is known that he had a green coat.

In his power armor however, he is an impressive and terrifying sight to friends and foe alike, seemingly acting as the "muscle" of the group. As Littlepip describes when they first met, SteelHooves was completely concealed in steel-grey armor, even his tail. He had a bright lamp on his helmet's forehead to spotlight targets, with a huge grenade machine gun on the right side of his monstrous battle saddle and a large box filled with missiles on the left.

It's implied that he has a deep, resonant voice as Spike describes him as sounding like "Flutterguy"; a reference to the deep masculine voice Fluttershy temporarily gained while affected by poison joke before the war.

Grim, lonesome, realistic, stubborn and relentless are what describes SteelHooves. He is often too willing to use his full firepower to annihilate his foes, even if his friends may be caught in the crossfire. He is unable to open up to others, or to allow them to care for him. He also seem to possess a suicidal drive, often going into battle headfirst regardless of his injuries and willing to resign himself to death.

Under Littlepip's leadership however, Steelhooves eventually grows closer to his friends and even forms a bond with Xenith whom he initially hated on account of being a zebra. He allows Littlepip to look into his memory orbs to see his past and true self: One who is willing to kill behind his friends' back.

To his friends however, the words 'Steadfast, enduring, unwavering and a true friend' are what truly defines "Steelhooves" Applesnack.

SteelHooves received military training, and was proficient in ordinary weaponry; moreover, he was skilled, in the use of larger weapons, such as missile launchers and grenade machine guns, the two weapons usually mounted on his battle saddle.

During the war SteelHooves also proved to be a very capable fighter, being able to force Zecora on the defensive in close-quarter combat. Despite her skills, Zecora was unable to defend against his rage-crazed strikes and was countered and killed. (Note, however, that Zecora was actually on his side, and was trying not to fight him.)

SteelHooves was also very good with words, being able to spin effective lies to mask his intentions (or his deeds), and having the charisma and willing-to-do-whatever-it-takes mindset to be a competent leader.

Littlepip - Admires and cares deeply for Littlepip and thankful to her for saving his life. He considers Littlepip to be his leader and superior, and obeys her orders without hesitation even if he disagrees with her. He also chides her occasionally for her flaws.

Calamity - SteelHooves has a friendly relationship with Calamity, often sharing sarcastic comments about his plans or ideas, aside of his general behavior. He used to disapprove of Calamity's mania for scavenging (especially when it came to Steel Rangers' equipment), but eventually acknowledged the necessity of it. They share a deep mutual respect for each other's understanding of guns and mechanics.

Velvet Remedy - He was a friend to Velvet Remedy and she cares deeply for him. He does worry for her as well, as seen when he remarked to Littlepip about how Velvet spent too much time in Fluttershy's memory orbs. It was his memories that later revealed to her what Fluttershy had done.

Applejack - He was a lover to Applejack. After Zecora's death, they drifted apart. She left him to go to stable 2, carrying his child. He never blamed her however, and unconditionally loved her even till 200 years later. Her actions continued to define him, and he strives to live up to her expectations.

Xenith - At first SteelHooves was against the idea of fighting alongside a zebra. He later forgets his ways of thinking about Xenith, showing at some point, a certain level of affection. Though they had major disagreements initially, they eventually formed mutual trust and respect for each other. ("It's what Applejack would have done.")

Spike - SteelHooves has crossed paths with Spike/Watcher in the past. Though he does not elaborate more, SteelHooves reveals that Watcher was even more secretive than him, and that he often seeks out ponies with positive qualities but they eventually get killed. When he met Spike at last, his only comment was "interesting". Spike treated SteelHooves with hostility however, and refused him entry into his cave.

SteelHooves, like other Canterlot ghouls, appears to have been based off of the Ghost People from Dead Money. He is fused to his armor, cannot be killed unless decapitated or disintegrated, and was turned that way by the Pink Cloud. The same facts are true for Ghost People: they are fused to their hazmat suits, will get back up unless a limb is chopped off or they are turned to ash, and were transformed into this by the Cloud, a red haze that lingers over the Sierra Madre. 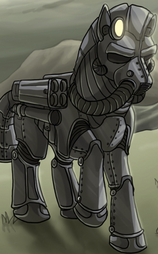 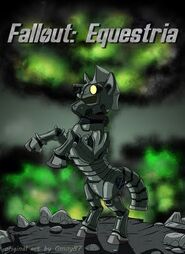 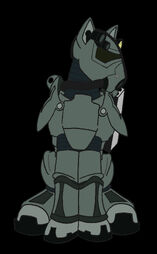 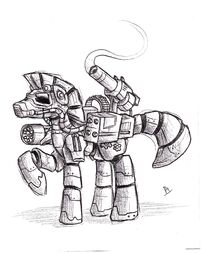 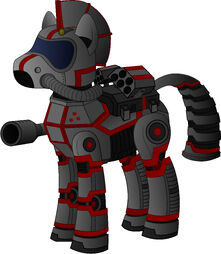 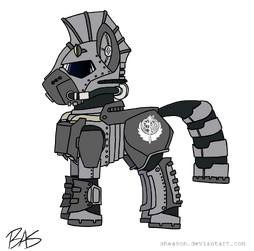 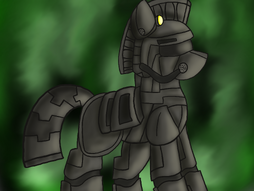 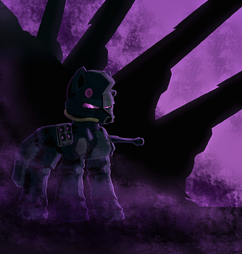