The Steel Rangers are an elite faction of militant, technologically-advanced earth and unicorn ponies clad in steel armor. The last remaining members of the Ministry of Wartime Technology, they were born when it and the Ministry of Arcane Sciences cooperated to create the steel power armor that personifies the Steel Rangers.

The Steel Rangers were given oaths during their service, specifically to protect Equestria and its people. Pinkie Pie notably ordered a group of Steel Rangers to accompany her specialists 'The Pinks' in a special operation in Manehatten, specifically the capture and disarming of a Balefire Bomb, smuggled into Equestria by Zebra and ponies loyal to the zebra, working for the Four Stars company.

When the Megaspells fell, the Steel Rangers managed to survive the apocalypse, either in bunkers, stables, or as Ghouls. The order emerged into the Equestrian wasteland after the fallout and set about recovering and protecting technology. Several Contingents of the order sprung up, including the Manehatten, Fillydelphia & Trottingham contingents.

The Rangers views on their oaths have become warped and many of them no longer care about protecting innocent wasteland ponies, instead fixated upon the recovery of technology. Some of the Rangers have a shoot-first, ask-questions later policy and will employ it in the pursuit of securing valuable technology, like what happened with the Fillydelphia contingent and Calamity, when they noticed he had Spitfire's Thunder.

The Rangers suffered a schism when SteelHooves rebelled against the practices of the Fillydelphia contingent and their unprovoked attack on Stable 2. Many rangers flocked to SteelHooves, renaming themselves Applejack's Rangers and painting themselves red as a sign of their desertion. Littlepip had a run-in with the Steel Rangers after this, including a firefight at Bucklyn Cross after an attempted hostage exchange went bad.

Steel Rangers and Applejack's Rangers fought side by side against the Enclave when they began assaulting the Equestrian Wasteland.

Steel Rangers are known for their obsession with the most advanced pre-war technology that the Equestrian Wasteland has to offer. Their major goal is to collect, catalog, and research any technology they can find, in hopes that they may one day be able to duplicate it.

This obsession, combined with their militant ruthlessness, makes them one of the most aggressively advanced factions in the Equestrian Wasteland. Most Steel Ranger soldiers are equipped with a full metal suit of power armor, making them frighteningly effective combatants.

The Steel Rangers are a highly militarized faction, its bulk comprised of soldiers who comb the ruins of the Equestrian Wasteland, seeking remnants of technology and history from the pre-war era. Almost every member of the Steel Rangers is combat-trained, armed, and prepared for deployment at a moment's notice.

The power armor that the Steel Rangers wear is made almost entirely of metal and is embedded with several magical gemstones, one of which enhance the user's strength, allowing easier to manage for the ponies inside. The armor has a special integrated battle saddle designed to hold all manner of weapons, including heavy weapons like grenade-chainguns, mini-guns, and missile launchers.

It also features a full software suite, designed by Stable-Tec and extraordinarily similar to a PipBuck, that includes E.F.S., S.A.T.S., and a medical suite that can monitor the health of the host and administer drugs and medicine on demand.

The command structure of the Steel Rangers is organized into a strict, non-linear hierarchy of ranks. They can be categorized into one of three branches: the equally important Civilian and Military branches, and the Command branch.

An Elder is the highest ranking officer of a Steel Ranger regional chapter. The Elder typically commands the rest of the local chapter, and coordinates with Elders from other chapters regarding faction-wide policies and initiatives.

A Star Paladin is a high-ranking Steel Ranger operative who has the freedom to pursue and organize their own operations outside of the rank and file army. They typically do so alone, working as agents, though they appear to have seniority over members of both the Military and Civilian branches.

Senior Paladins are officers who preside over a large contingent of Steel Rangers.

Paladins are officers who lead a Steel Ranger platoon of 24. They report directly to Senior Paladins.
Crusader

Crusaders are sergeants who lead a Steel Ranger squad of 8. They report directly to Paladins.

Knights are rank-and-file soldiers in the Steel Rangers. They operate in squads lead by Crusaders.

Scribes are members of the Steel Rangers' civilian workforce. They are typically responsible for research, maintenance, and other non-combat activities, and share the same rank as a Knight. Only one rank of Scribe is known, though it is possible that there are several leadership ranks that coincide with the seniority of Paladins and Senior Paladins.

The Steel Rangers are organized into several contingents, each of which operates at varying capacity in multiple regions. Each contingent is commanded by one Elder and one or more Star Paladins.

The Fillydelphia contingent was suffering losses from Red Eyes army for many years. They gave Littlepip information that led her to Fillydelphia. When she was gone, the Rangers decided to pack up and leave due to persistent harrassment from Red Eye's forces.

The Fillydelphia contingent lead an assault on Stable 2, attempting to claim it as a base of operations. These rangers suffered a schism, where several of them were detained by their comrades for refusing to kill the Stable ponies. Littlepip and her companions managed to kill the Steel Rangers assaulting her home and rescue the stable's surviving inhabitants.

The surviving Rangers that weren't assaulting Stable 2 were absorbed into SteelHooves' Manehatten Contingent as Applejack Rangers.

The Manehatten contingent is set up in Stable 29 located in Manehatten city. The Stable housed a crusader mainframe which Cottage cheese tried to download his consciousness into and turn it into a soul jar to prevent his death. Cottage Cheese was stopped by the timely arrival of Littlepip who shut down the mainframe, preventing the Elder's dreams of immortality.

A group of Manehatten Rangers, operating out of their outpost at Bucklyn Cross, were slaughtered by Littlepip, after one of the Steel Rangers panics and accidentally fires his weapon, sparking a firefight. Littlepip took the water talisman she had come to Bucklyn Cross to exchange Cottage Cheese for. Elder Cottage Cheese was sent to friendship city along with Granpa Rattle and the surviving Arbu Foals.

SteelHooves took over the contingent and lead them for a time as Applejack's Rangers. These Rangers would continue to follow Steelhooves example even after his death. The Manehatten contingent also protected Spike's cave and by extension, The Gardens of Equestria during the assault of Neighvaro/S.P.P by Littlepip, Spike and numerous allies.

The Steel Rangers have made appearances in numerous side stories. Below is a list of some of these groups of Steel Rangers.

{{TableO|Steel Rangers in Side Stories|

Warning! The following information applies only to its associated side story, and is thus considered non-canon in the Fallout: Equestria universe.

The Steel Ranger's are based off the of the Brotherhood of Steel from the fallout games. 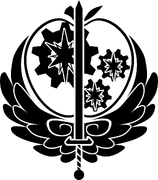 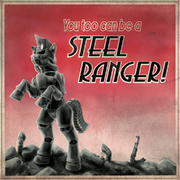 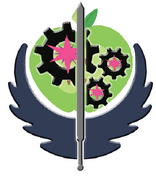