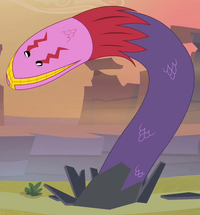 A Tatzlwurm is a massive, worm-like creature, firstly introduced in the Season 4 episode of "Three's a Crowd". It does not appear in the main canon of Fallout: Equestria, but has so far appeared in one side-fic. It has a tripartite jaw and a maw containing black tentacles that catches its prey with little means of escape though it is particularly vulnerable to magic, be it from unicorn ponies or alicorns. Its black tentacle-like tongues are also vulnerable to gunfire, even crippling them.

The Tatzlwurm briefly appeared in Chapter 9 where it was burrowing underground, which had also left two large holes that tunneled through an underground bunker. It soon devoured a couple of unfortunate Slavers before having mysteriously left again. Soon, it emerges from the ground and letting out a terrifying roar at Zero and his allies; it soon pursued its prey from the following Chapter, pursuing them relentlessly before being distracted by Securitrons who had opened fire at it. Despite being damaged from gunfire from its tongues, it had single handedly destroyed all Securitrons before it resumed pursuing after its original preys. It even went as far as to pursue them in a narrow and collapsing tunnel as the heroes did what they could to escape it. Eventually, Gale Storm hatched a plan and provided a distraction for the giant worm as she led it towards the cliff. The Tatzlwurm was close to catching its prey, but had soon fallen off of a cliff as it had plummeted to its doom.

Its final fate is currently unknown.

Retrieved from "https://falloutequestria.fandom.com/wiki/Tatzlwurm?oldid=34419"
Community content is available under CC-BY-SA unless otherwise noted.