The Unity is the telepathic hive-mind under the control of The Goddess in which all alicorns exist.

All alicorns everywhere, regardless of distance, are connected to the hive-mind of the Unity. They share their consciousness, their emotions, and their thoughts to such a degree that alicorns refer to themselves as "We" rather than "I". The Unity as a whole can learn from the experiences of each individual, even going so far as to remember the circumstances of a sister's death; each trick used to defeat an alicorn works only once.

Knowledge of spells is also shared among the Unity. Each alicorn possesses a single spell based on their color -- teleportation, invisibility, or telepathy -- plus whatever magic they had learned before being transformed. However, since they are all linked, each alicorn can "borrow" the spells known by any other alicorn, making each a powerful magic-user in her own right.

The Unity is controlled, by and large, by its most powerful personalities. Trixie dominates the collective consciousness, but Twilight Sparkle contributes significantly. Gestalt and Mosaic are also noted as dominant personalities, able to influence the creation of new alicorns, but they seem content to let the other two carry on as they wish. Their telepathic link with one another, however, forms the foundation for the hive-mind that defines the Unity.

The Goddess's goal is simple; she wants all ponies to join the Unity. She sees this as a mercy, as alicorns are perfectly adapted to the Wasteland. Immune to practically all the Wasteland's hazards and more powerful than almost any other creature, she sees alicornhood as the perfection of ponykind, and herself as its savior.

The choice to join, however, must be voluntary. Being connected to an unwilling mind is unpleasant for all involved, so the Goddess forces Unity on ponies only in dire circumstances.

Non-ponies, on the other hand, are not part of the Goddess's plan. In her ultimate vision of the world, all other species would have to be wiped out or subjugated as threats to the Unity.

The Canterlot Pink Cloud, for unknown reasons, blocks the Unity's telepathic connection. Without it, alicorns become disoriented and begin to recover memories of their old life and develop new individuality. This can be psychologically painful, likely depending on the alicorn's age. While an alicorn in Zebratown merely complained of the unpleasantness of remembering she used to be male, one of the first alicorns -- a green created from a scientist at Maripony with a flask for a cutie mark -- was driven to madness by the loss of the Unity. She created a second personality to act as her personal Goddess, which became murderous/suicidal against the other personality when faced with the threat of obsolescence upon rejoining the Unity. Nightseer, on the other hand, handled severance well, taking on a leadership role among the alicorns assigned to find the Black Book in Canterlot.

While severed from the Unity, Green alicorns retain their own personal telepathy, which remains effective over short range; Nightseer was able to speak telepathically to Littlepip within the Cloud-filled ruins of Canterlot Castle.

When the Goddess was killed in the second balefire bombing of Maripony, the Unity disintegrated. While green alicorns still retained their telepathy, the race immediately began to develop individuality, learning new ways to apply their magic within days. The green alicorns seem to have created smaller, temporary Unity groups for mutual support -- the alicorns who approached Velvet Remedy for help with their lack of males spoke in unison -- but several years later, Surprise (the third alicorn foal to be born following the events of Fallout: Equestria) displayed no signs of telepathy or belonging to a hive-mind. 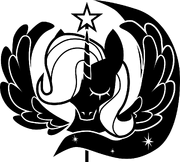 faction logo by DotRook
Add a photo to this gallery
Retrieved from "https://falloutequestria.fandom.com/wiki/The_Unity?oldid=44747"
Community content is available under CC-BY-SA unless otherwise noted.