Trotternheimer's Folly fires unique rounds, and each round discovered so far has been inside a case that cannot be opened except by members of a few specific genetic lines. The rounds emit radiation, high enough for PipBucks to provide warnings when the case is open. Once Trottenheimer's Folly is loaded, it interfaces with a PipBuck, using S.A.T.S. targeting to guide the beam. Upon being fired, the weapon surrounds the user in a magical field, which prevents them from being blown back or killed by the massive recoil of the weapon. A second field acts as a beam guide, since no physical barrel could withstand Folly's firing.

The weapon fires a conical white beam that has an unknown maximum range and destructive capability, but appears to completely disintegrate everything in its path. The first time it was used by Blackjack, it destroyed an Enclave Vertibuck, the control tower behind it, and burned a large hole in the clouds as well. It also was used to level a factory and to destroy the Robomination - an entire factory production line that came alive and attacked Blackjack and friends whilst underground. Blackjack also used it to sink the battleship The Celestia by firing down into the hull. It was later captured by Cognitium after Blackjack lost it when destroying the Celestia.

Trottenheimer's Folly was developed by the stallion Trottenheimer at the request of O.I.A. director Goldenblood as a last ditch means of destroying "Tom" and therefore halting Project Horizons. Based on the dissected round found with the Wall Choir, Silver Bullet rounds consist of a Starmetal casing that contains a Moonstone core, with the two separated by a Taint buffer. On firing, the casing and core are forced together, causing an Moonstone and Starmetal reaction which is contained and directed by the magical fields the weapon produces.

There is a catch to using Trottenheimer's Folly, though. A side effect of the design is that, on firing, the Taint in each round, which is not necessary once the reaction is initiated, is released in a spray around the weapon which seriously contaminates the user. Repeated use of Folly will eventually kill the user, and was the primary cause of the cancer that was slowly killing Blackjack. It was designed this way due to the choices of Goldenblood, who wished that the weapon would kill him in punishment for his perceived wrongdoings during the war. After Blackjack used the weapon to destroy the Celestia, the mutations due to Taint contamination very nearly killed her.

Blackjack, preparing to fire Folly at the Robomination
~ 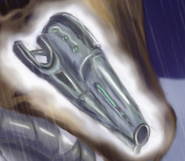 Trottenheimer's Folly and Blackjack Statuette, by
~