Velvet Remedy, introduced in Chapter 1, is a unicorn mare and a main character in Fallout: Equestria. She was a member of Littlepip's party of wasteland wanderers, serving as the party's field medic. She was once a resident of Stable 2, where she worked as the Stable's singer and entertainer.

Her role in Littlepip's party were primarily that of a field medic, trader, and diplomatic negotiator. She rarely ever participated in combat, only occasionally making use of short-ranged weapons and non-lethal spells when absolutely necessary.

Velvet Remedy was a charcoal coated Unicorn with a white mane including streaks of gold and red. She is a strong follower of Fluttershy and is seen throughout the story watching a fond memory orb of her. Her special talent is to sing beautifully, just as her "many-times-great grandmother" Sweetie Belle did. She is also a very capable medical pony, preferring this as her special talent in Stable 2 instead. Later in her adventures, she adopts a Balefire Phoenix named Pyrelight.

It is not well described how her life in the Stable was. She was, however, the Stable's singer and peformer which made her very popular among the ponies living there.

She found her life in the Stable unhappy, and a restriction on her freedom as she wished to be a medic. This led to her decision to leave Stable 2 in search of a new life as a medical pony in the Wasteland. She first tricked Littlepip into removing her PipBuck, so the Overmare could not track her down, then unlocked the stable door with the password 'CMC3BFF'. Her immediate action upon escaping Stable 2 was to leave a message in a nearby terminal pleading for other Stable 2 ponies not to follow her

After she left the stable, Velvet Remedy immediately set out to Appleloosa to try and aid ponies in need. After being "rescued" by Littlepip and Calamity, Velvet joined the two in their adventure across the wasteland. She often healed and tended to other ponies in need, and was seen as a motherly figure by many.

Velvet Remedy eventually acquires a memory orb of Fluttershy, and becomes obsessed with it, often retreating into it to escape the harshness of the wastelands: an act which greatly worries her companions.

In Tenpony Tower, Velvet Remedy often engaged (and often dragging Littlepip with her) in spa-treatments for some well-needed rest. She also makes good use of her time by visiting the clinic to pick up medical supplies as well as learning new protection and healing spells.

During the Battle at Stable 2, Velvet Remedy was heavily shaken, but ended up partially assuming temporary leadership responsibilities, due to Littlepip's incapacitation, and attempted diplomacy with the attacking Steel Rangers; an action that was unfortunately not returned kindly by them.

Velvet Remedy suffers a number of emotional breakdowns during her journey with Littlepip: for example, after SteelHooves death, Velvet refused to accompany Littlepip for a time, due to her losing hope in ponykind. Another of her darkest moment was when she and her friends came across a group of raiders sadistically forcing fillies and colts to fight to the death, causing her to snap and murder the raiders without giving them a chance to surrender.

When they discovered Fluttershy had been transformed into a tree by the Killing Joke plant, Velvet Remedy was overcome by anguish. Though they were forced to leave Fluttershy due to the ongoing conflict, she later worked with Xenith tirelessly to find a cure for Fluttershy.

Towards the end of the conflict, Velvet Remedy's kindness was known even to the Alicorns, and she earned their allegiance in return for agreeing to help them find a way to procreate. Several Hellhounds also lent their aid to Littlepip on account of her.

Throughout their travels, Velvet Remedy grows closer to Calamity and gets into an intimate relationship with him. Despite their various differences and arguments, their love remained pure to the very end. The two of them were finally married after the Day of Sunshine and Rainbows.

Velvet becomes the leader of the Followers of the Apocalypse several years later.

Velvet Remedy was an incredibly kind and compassionate pony, and was capable of showing compassion to creatures that many wastelanders consider to be nothing more than monsters, like Hellhounds and Alicorns. Velvet's compassion for others extends to almost anyone; the exception being Raiders, whom she views as needless bloodthirsty sadists.

Velvet Remedy idolizes Fluttershy to a point of obsession. She sees her as a paragon of kindness and was partly inspired to become a doctor by her.

In her first appearance, Velvet Remedy has been described as a gorgeous charcoal-coated unicorn with streaks of red and gold in her white mane and with a voice as smooth as silk and rich as finest chocolate. Velvet is aware of her beauty, and often combines it with her charisma to smooth-talk other ponies and traders into giving them better deals, or to negotiate. She even uses her good looks to seduce Littlepip on several occasions, though it was often out of playfulness and a desire to tease the younger mare, whom she knows has an immense crush on her.

As a healer, the yellow saddlebags with pink butterflies containing medical supplies on her flank soon become an inseparable part of her appearance.

Velvet is very good with words, both in diplomacy and convincing opposing parties, and in haggling for good bargains. She is also an exceptional singer.

Her true drive, however, rests in medicine, where she has always applied with great success, and continues to by being the main team medic. She never shies away from a patient in need.

Although she abhors combat, and is a poor shot, she is often forced to join the fray, armed with her combat shotgun against non-intelligent (or non-organic) threats, and with her dart gun against all the rest.

Velvet does know a fair share of spells, mostly useful for her medical routines. Notable exceptions are her shield spell, her clothes-cleaning spell (also good for drying purposes), a group-buff spell to protect against the vaporization effect of energy weapons, and an anesthetic spell, useful for depriving living enemies of motor function.

Pyrelight was a Balefire phoenix, and was the faithful 'pet'/companion of Velvet Remedy: it quickly developed a bond with Velvet after she saved it from a Bloodwing attack by incinerating it. Interestingly, Pyrelight was initially also jealous for Velvet Remedy's attention, but eventually matured past that.

Velvet and Pyrelight were very fond and protective of each other. They would both sacrifice their lives for one another readily. During the course of the adventure, Pyrelight grew an affection to the other team-mates as well, especially Littlepip; being there in more than one occasion to help her when in need.

Pyrelight also proved to be an irreplaceable member of the group, serving as an extremely capable combatant, scout and support. When given sources of radiation, Pyrelight managed to grow even stronger in power and often rained radioactive devastation on unfortunate foes.

Pyrelight was a carnivore by nature, and did not hesitate to hunt down mice or tainted parasprites to consume.

Apprearances in Other Side Stories

Velvet Remedy was mentioned by Compass during a tour in Manehattan, in which Zero referred to her name as a type of food, specifically cake. She was mentioned again by Zero in Chapter 21, still referring to her name as cake unless he thought that she was named after one, and one of her songs is played in his PipBuck.

Songs by Velvet Remedy often play on the radio broadcasts from Melody including two recent releases Some Things Never Change and The Day the World Died. She later appears in Chapter 13 to help teach Ruby Starlight more about healing spells.

Littlepip
Littlepip first saw Velvet Remedy at a birthday party for Stable 2's Overmare's daughter's birthday, and fostered a crush on her ever since. They first met when Velvet Remedy brought in her PipBuck for repairs, allowing her to escape while it was in Littlepip's possession. Immediately following the opening of Stable 2, the relationship was one sided as Littlepip envisioned herself as Velvet Remedy's rescuer, while Velvet's resolve to forever be free of Stable life allowed her to emotionally detatch from everyone she had known.

Shortly after finding her at Appleloosa, responsibility turned around as Velvet Remedy would repeatedly bring Littlepip back from the brink of death. Velvet Remedy assumed a near maternal role in Littlepip's life, acting as a moral compass and showing concern for her well being. This, to her initial dismay, prevented the sort of closeness that Littlepip had always dreamed of.

Calamity
Calamity met Velvet Remedy when he and Littlepip went to deal with the slaver town Old Appleloosa. They did not really see eye to eye in the beginning, but through the numerous adventures, they managed to get quite close and intimate. They shared their first kiss in Stable Two when Velvet was badly injured. The two were initially concerned about Littlepip getting jealous, and were relived when she gave them her blessings instead. Although the two bickered from time to time, their love for each other remained unwavering.

SteelHooves
Steelhooves and Velvet Remedy did not have much in common, if anything at all. They were initially only really "friends through friends", via Littlepip and Calamity: both working as part of the team towards a common goal. Though better defined as "acquaintances" more so than friends initially, the two would eventually care for each other (though Steelhooves would never openly admit it), and would both readily defend each other with their lives. Velvet was deeply hurt at SteelHooves' death, and contributed to her later establishment of the Followers of the Apocalypse.

Homage
Velvet respected Homage and had a friendly relationship with her. Due to Velvet's singing abilities and blood ties to Sweetie Belle, Velvet occasionally sung for DJ Pon3's channel through Homage. Once or twice, they tagged-team to embarrass Littlepip.

Xenith
Velvet felt very sympathetic towards Xenith after the stories she has told. However, Xenith established more than once that she does not need Velvet's pity. This caused her and Velvet carved out a mutual respect for each other, thus leading to a healthy friendship. Xenith complimented Velvet's healing magic with her understanding of herbs and natural medicines. 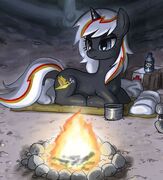 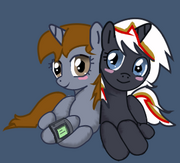 The original shipping by slowlearner46 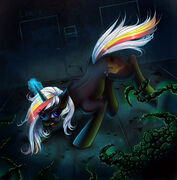 Attacked by tentacles by limreiart

The element of kindness by calamityb31