Xenith was a zebra mare and former Fillydelphia slave. Xenith first met Littlepip as an opponent in The Pit- Fillydelphia's slave fighting arena.

Xenith's great grandparents were survivors of Stable 3, a failed stable made up of an equal mix of ponies and zebras. The residents of the stable traveled across the Equestrian Wasteland, attempting to learn about lost zebra history. Her grandparents partook in the journey and eventually gathered an extensive knowledge of zebra alchemy. They passed on everything they knew to Xenith before passing away.

Xenith was captured by slavers at an unknown date and brought to Fillydelphia. She pretended to be mute to discourage her slavers from cutting her tongue out. She silently endured years of torture, rape, and hard labor before entering the Pit where she earned a reputation as a fierce gladiator. Eventually she fought Littlepip and came very close to killing her, but was knocked unconscious and later rescued by her. When she awoke, Xenith decided to help Littlepip and swore a life-debt to her, even going so far as to carry Littlepip on her back. Along with the help of a Balefire Phoenix named Pyrelight, the two manage to kill a Super Alicorn before being trapped and recaptured by Red Eye. Later, when Calamity, Velvet Remedy, and SteelHooves captured Stern, they exchanged her back to Red Eye in return for Littlepip and Xenith's freedom.

Xenith was revealed to have a previously unknown daughter named Xephyr, who was spared by the slavers and abandoned in Glyphmark. While near the city of Canterlot, Xenith helped rescue her daughter and her daughter's village. She taught the zebras of Glyphmark how to make certain drugs to help increase the town's prosperity afterwards.

Xenith then began to travel with Littlepip again. Her knowledge of zebra alchemy saved them on more than one occasion, even once being used to save Velvet Remedy's leg after it was severed by a Hellhound. After entering the Everfree Forest with the gang, Xenith was attacked by Killing Joke and forced to wear a crude, used cast with clotted blood on it to save her life. She was in critical condition but survived, following a dangerous and risky operation preformed by Life Bloom.

She fought at the battle of Fillydelphia along with her daughter with the goal to kill Stern, a slave master and personal enforcer of Red Eye. He was also the one responsible for the plight of Glyphmark and the death of Xenith's husband. During a violent fight Stern tried to escape amidst the chaos, but was pursued by Xenith, who used a Bloodwing Talisman to grant herself a pair of wings. Despite her magical assistance, Stern used her natural air superiority and comfortability to defeat Xenith. Stern fails to account for one of Xephyr's attacks, however, and was killed when she skydived into Sterns' back.

Xenith could not stand any form of physical contact, to the point where she would have a violent reflex to a hug. This was due to the torture she endured in Fillydelphia, and one particular incident where she was raped with the horn of a dead unicorn. She was initially unwilling to receive medical treatment thanks to her phobia, but she eventually warmed up to Littlepip and her friends.

Xenith was noted as being selfless and kind-hearted. Although keeping up a guise of being mute, she gave heartfelt apologies to her opponents before killing them. When Velvet Remedy was about to be attacked by Killing Joke plants, Xenith pushed her aside without hesitation and was nearly killed. Despite her grievous injuries, she made sure to warn the others about the dangerous plant before falling unconscious.

Xenith was described as having a black and white striped coat, as well as a 'generic' zebra mane. She had countless scars, both physical and emotional, from the horrors of Fillydelphia. Littlepip and Homage found Xenith attractive in a rugged sort of way.

Xenith was an elite fighter and a master in unarmed combatant. She perfected the zebra fighting style 'Fallen Caesar', an elegant yet brutal fighting style taught to the Zebra Caesar's guards. She could also perform a special pinpoint hoofstrike which temporarily paralyzed its target. She used her mastery of stealth and unarmed fighting to silently and quickly dispatch opponents. Her combat skills are so advanced she was able to take down armored Steel Rangers and Hellhounds.

In addition to her fighting skills, Xenith was also a very skilled alchemist. She was capable of brewing several kinds of useful potions and poultices that have a wide variety of uses, including a mixture that allowed her to walk across ceilings.

Littlepip -Xenith felt obligated to aid Littlepip in any way she can, namely potion making and stealth techniques. Littlepip was fond of Xenith's helpfulness and kindness.

Calamity - Calamity showed an instant liking for Xenith, who returned the feelings respectfully.

Velvet Remedy - Xenith, at first, just got along with Velvet Remedy. After Xenith selflessy pushed Velvet aside to save her from the Killing Joke, they began to foster a real friendship.

SteelHooves - Xenith had great respect for Steelhooves, regardless of his apathy towards zebras.

Homage - Xenith initially didn't like Homage due to her possession of a Star Blaster. This fear comes from Zebra lore in which Nightmare Moon and anything born of the stars are viewed as evil. She eventually began to respect Homage when she realized why Homage kept it locked away. 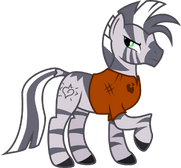 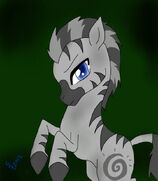 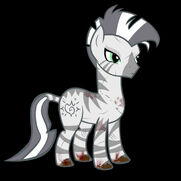 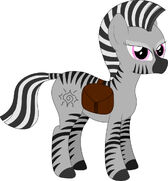 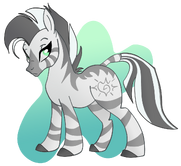 by ClutterCluster
Community content is available under CC-BY-SA unless otherwise noted.
Advertisement